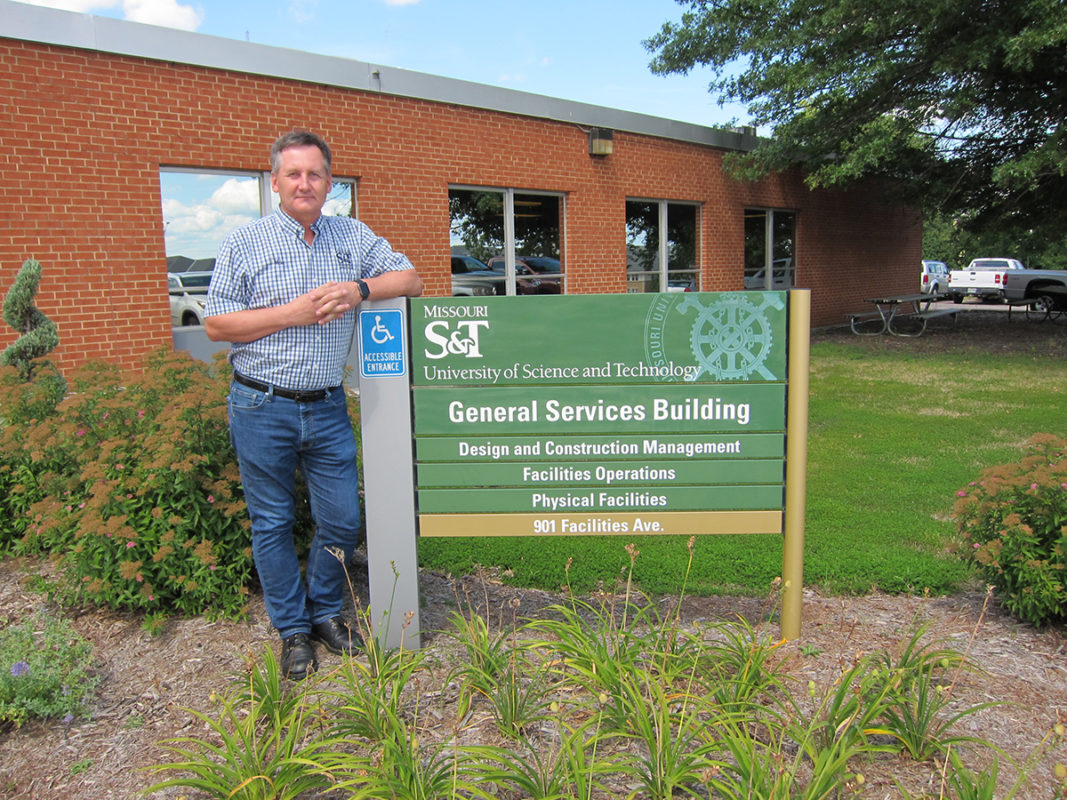 Missouri S&T’s commencement ceremonies, career fairs and high school robotic matches all share one element: Mike Bassett is coordinating the facility services behind the scenes. As facilities operations manager, he specializes in the details we may take for granted – like temperature, seating and stage setup.

“Lots of things go on behind the scenes that I didn’t realize before I took this position,” Mike says. “We plan out these events months ahead. In January we start setting up cooling requirements for Gale Bullman to make sure everyone is comfortable at the graduation ceremonies in May.”

It is a lot of work, but Mike says it is worth it to provide memorable experiences.

“I really enjoy working with the students and the folks I work with,” Mike says. “I work with very talented individuals that are all dedicated to the university and students. We take pride in serving students.”

Mike joined S&T’s staff as a temporary groundskeeper in 2010 and started working full-time as a senior engineering technician in rock mechanics the following year.

Guide to the Galaxy

Mike fondly remembers his childhood in Dixon, Missouri, where his parents and brother continue to live and where Mike attends the church where he was baptized as a child.

Mike can trace his hobby of restoring vintage cars to his love for vehicles that sprouted in childhood. He now proudly owns two 1963 Ford Galaxy cars. He first fell in love with the Galaxy when his aunt bought one new in 1963. Nearly two years ago he found one for sale like his aunt owned – but the owner had two for sale and insisted on selling them together – so Mike bought them both. He also has vehicles he owned since he was a kid, including a black 1955 Chevrolet 210 car and a blue 1953 Ford F100 pickup truck. His collection also includes a 1993 Mustang with a 5.0-liter V8 engine, which was a retired police car he bought in Georgia at a government auction.

His parents modeled hard work for him, and Mike learned a lot at his dad’s business about auto mechanics and bodywork. An employee taught 13-year-old Mike how to paint racing flames on vehicles. Mike says his dad wasn’t thrilled to discover flames painted alongside the body of a company dump truck – but they still laugh about it to this day.

Mike at a glance

College: Technical degree in welding and metallurgy from Waynesville Technical College and has taken some Columbia College classes

Most proud of: Working to preserve historical buildings on campus and leading the move and installation of the Rolla Mural from the Rolla Daily News building to the Curtis Laws Wilson Library

People are surprised to learn: Mike attended his junior and high school proms at S&T. The dances were held in the ballroom – yes, there was a ballroom – on the second floor of Centennial Hall.

Advice to other employees: “Do everything in your power to make wherever you’re at and whatever you do the best it can be. Never be afraid to learn. Try to learn something new every day.”

Family: Married to Cindy Bassett, with two daughters and sons-in law, Kayla and Johnny, and Liz and Ben; and two granddaughters, Hannah, age 5, and Clara, age 3

ABOUT THE STAFF SPOTLIGHT