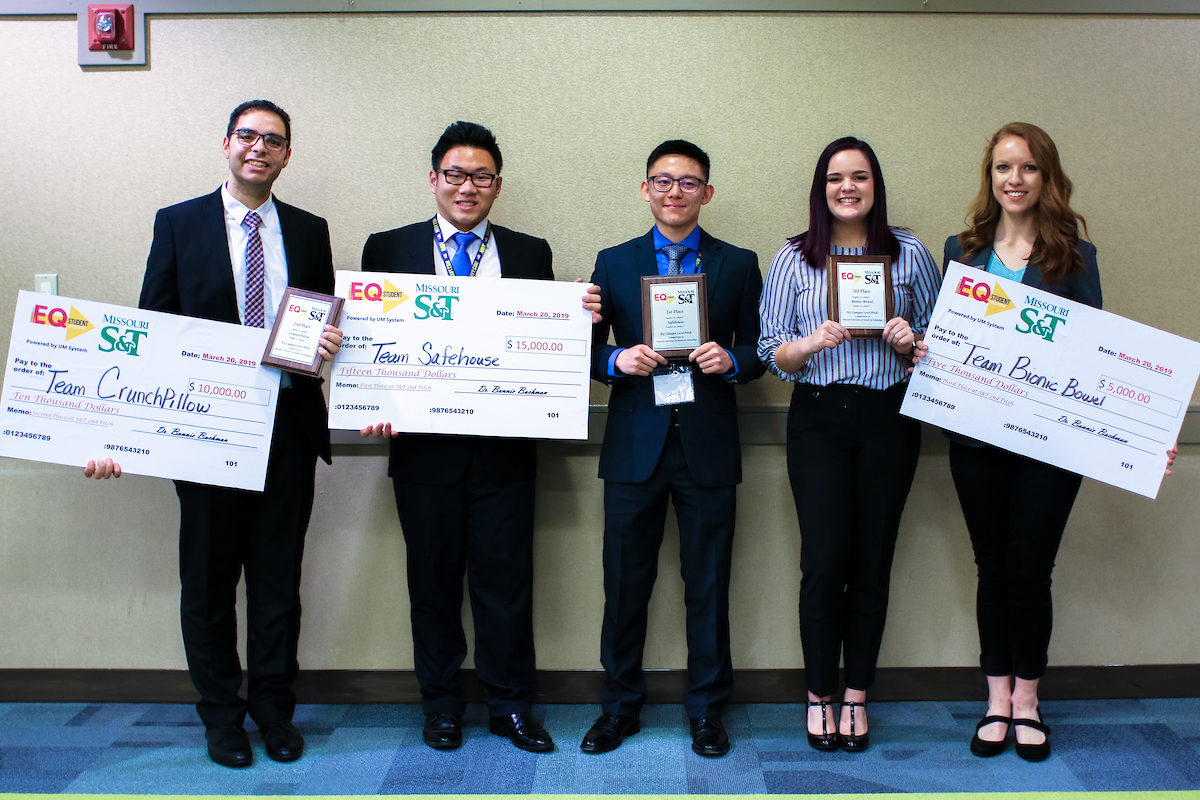 Three teams of Missouri S&T students will pitch their ideas in a “shark tank” style competition at the University of Missouri System’s Entrepreneur Quest (EQ) program.

The teams will compete against each other, and the top three finalists from the other UM System campuses during the EQ final rounds that will take place in conjunction with the system’s Entrepreneurial Educator Summit on Friday, April 5, in Columbia.

Missouri S&T’s first place team from the campuswide March competition is “Safehouse” by Yanshuo Zhang, a junior in mechanical engineering from St. Louis, and Erik Lee, a junior in computer science from Chesterfield, Missouri. Safehouse focuses on creating semi-permanent portable shelters for displaced peoples. Using high-grade plastic polymers, the team would create shelters that are adaptable to irregular terrain and can be assembled in a few hours.

The “CrunchPillow,” designed by Yasser Darwish, a Ph.D. student in civil engineering, under the guidance of Dr. Mohamed ElGawady, Benavides Faculty Scholar and professor of civil engineering took second at S&T and will compete in Columbia in April. Darwish says the CrunchPillow aims to “make vehicle crashes as soft as a pillow.” The team developed new bumper panels that can dissipate high levels of impact energy by changing from one shape to another, so when a vehicle is involved in a crash, the panel will dissipate the impact energy protecting both cars.

The third-place team to represent Missouri S&T is “Bionic Bowel” by Vanessa Mahan, a junior in biological sciences from Kansas City, Missouri, and Catherine Pollman, a senior in biological sciences from Waynesville, Missouri. By combining their biology studies with some ceramic engineering ideas, the two have worked to use bioactive glass as a way to potentially change the pH level in the body of a Crohn’s disease sufferer. By including the biomaterial in an oral medicine that dissolves and prevents scar tissue, the two realized that they could implant the glass in the human body via a pill to repair the damaged area.