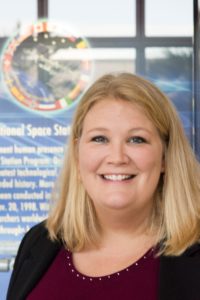 Dr. Lucie Johannes Sommer, a metallurgical engineering graduate, will give the 10th annual Thomas J. O’Keefe Lecture at 3:30 p.m. Thursday, Oct. 11, in Room 204 McNutt Hall. A reception will precede the lecture at 2:45-3:15 p.m. in McNutt Hall Commons. Her lecture is titled “Career Paths: A Metallurgical Engineer’s Path at NASA.”

Sommer is the International Space Station visiting vehicle chief engineer for NASA at the Johnson Space Center in Houston. Working at NASA was not part of her career plans when she started as a metallurgical engineering student at S&T, but keeping her mind open to new opportunities and experiences led her to a career that was more fun and fulfilling than she could have imagined. She earned her bachelor’s degree in 2002 and Ph.D. in 2006, both in metallurgical engineering.

In honor of Tom O’Keefe, Sally and Joe Rupp, a 1972 graduate in metallurgical engineering, invested in and created the lecture series in 2008. The Rupps felt this named lecture series would be an excellent way to maintain the strong academic environment and technical education that Tom O’Keefe helped to establish over his 40-year career at Missouri S&T. Joe serves as chair of Olin Corp., based in Clayton, Missouri. He also serves as director and trustee of numerous organizations, and is a member of the Missouri S&T Academy of Mines and Metallurgy and the S&T Board of Trustees.

Each year, the lecture series provides an opportunity for an alumnus or other outstanding individual to speak to students and the campus community about the impact and importance of education on his or her career.