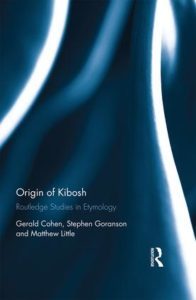 The phrase “put the kibosh on,” meaning “to put an end to,” dates back to an early 19th century poem, but a Cockney chimney sweep brought thephrase to the general public, says Dr. Gerald Cohen, a professor of German and Russian.

Cohen, who is an expert in etymology, or the study of word origins, co-authored a book on the subject with Dr. Stephen Goranson, a Duke University librarian, and Dr. Matthew Little, associate professor of English at Mississippi State University. The book, Origin of Kibosh, is the initial volume of Routledge Studies in Etymology. Read more.

On January 8, 2018. Posted in Accomplishments