Researchers get patent for fiber-optic micro-probes 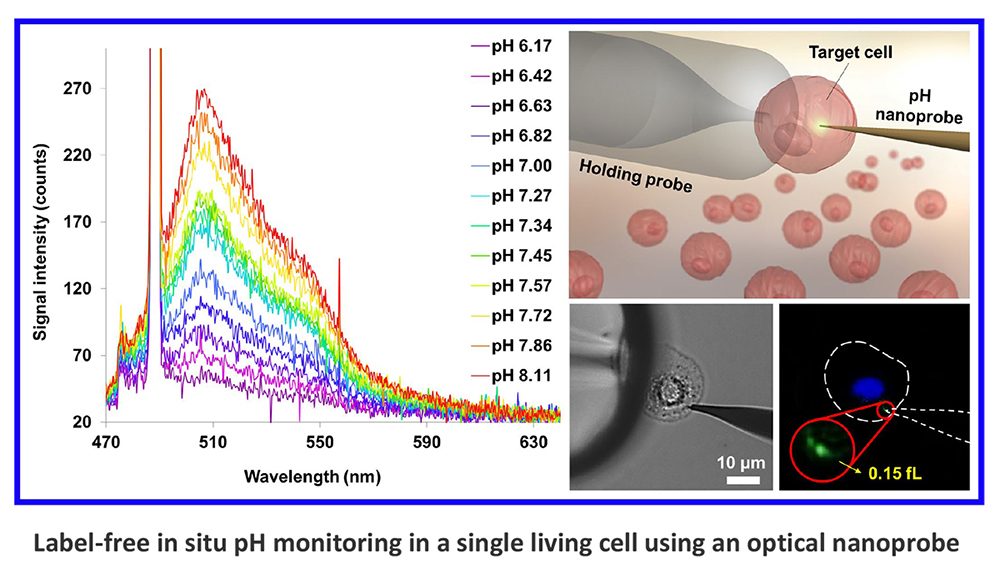 The patent is for the world’s smallest probe, equipped with scalable, multichannel detection abilities, and the first probe that can measure the pH (acidity level), temperature or antibodies from inside a single biological cell without destroying it, says Dr. Honglan Shi, research professor of chemistry at Missouri S&T and an inventor on the patent.

“In particular, this probe will be very useful for early diagnosis of cancer cells whose pH levels differ from normal cells,” Shi says. “It also has high potential for cancer therapy evaluation with its ability to measure intracellular and extracellular pH levels.”

The diameter of the micro-probe tip is a fraction of the diameter of a human hair. It can be inserted into a cell or similar substance, and its shaft transmits a laser source that collects optical signals through a luminescent or reflective material embedded at the tip. The change in the signals received define the pH, temperature levels or antigen-antibody bonding in the cell or microenvironment.

The resulting measurements could be used as biomarkers for biomedical research or diagnoses that are now difficult to obtain from larger probes that would damage a cell if inserted into it, notes Shi.

The research for the microprobe began with an award from the National Institutes of Health in 2012 to develop a multifunctional single-cell analyzer (grant number1R21GM104696-01). Shi says the research team worked three to four years on the project before filing for a patent that has taken five years to obtain.

“This is great science, and great technology,” says John Woodson, interim director of technology transfer and economic development at Missouri S&T. “This micro-probe is leading edge, but we have not yet found a partner to commercialize the technology. We are looking for the right fit, and the inventors are continuing their research to define specific biomedical applications for this probe.”

In addition to Shi, other researchers on the patent include:

On May 5, 2020. Posted in Accomplishments, Announcements