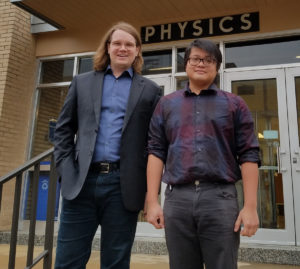 Jack Crewse and Yunsheng Qiu, Ph.D. students in physics, are winners of this year’s Schearer Prize, the Missouri S&T physics department’s annual graduate research competition. It is held in memory of Laird D. Schearer, the department’s first Curators’ Professor of physics, and rewards graduate students for outstanding research performed during the course of their graduate study.