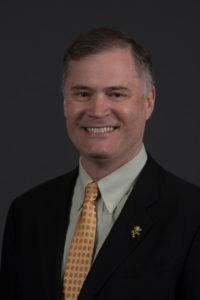 Dr. Daniel B. Oerther, professor of civil, architectural and environmental engineering, has been named a lifetime honorary fellow of the Academy of Nursing Education. As one of a handful of non-nursing fellows, he joins others who have made substantial contributions to nursing, nursing education, or to the National League for Nursing for nurse faculty and leaders in nursing education.

Founded in 1893, the NLN offers professional development, networking opportunities, testing services, nursing research grants, and public policy initiatives to its 40,000 individual and 1,200 institutional members. Established in 2007, the Academy of Nursing Education (ANE) of the NLN was founded to call attention to the work of those who are transforming nursing education. More than 250 leaders in nursing education have been inducted as fellows, and Oerther joins the ranks of nearly 20 non-nurse honorary fellows.

Oerther’s nomination was championed by his long-term mentor and friend, Dr. Andrea Lindell, vice provost of the College of Health Sciences and dean of nursing at Walden University. She cited his “primary contributions to nursing and nursing education in the areas of: i) inter-professional teaching/learning innovation; ii) intra-professional collaborative partnerships; and iii) public policy related to nursing education.”