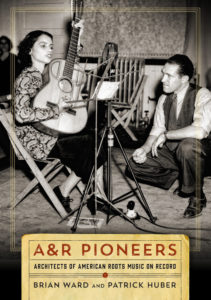 Dr. Patrick Huber, professor of history at S&T, and Dr. Brian Ward, professor of American studies at Northumbria University in Newcastle upon Tyne, have co-authored a book, A&R Pioneers: Architects of American Roots Music on Record, released May 15 by Vanderbilt University Press and the Country Music Foundation Press.

The 480-page book provides an account of the individuals who shaped the creation of what is now known as American roots music. It also shows how they established the job of today’s record producers known as “A&R” men — employees of the artists-and-repertoire division at a record label who scout for talent and material, and oversee the artists’ development in the market and artistically.

The book was six years in the making with research partially funded by a grant from the University of Missouri Research Board. Read more.