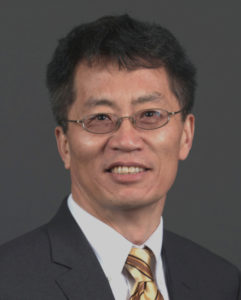 Dr. Stephen Gao, professor of geology and geophysics, has won the 2018 Governor’s Award for Excellence in Teaching.

The award is presented annually to one faculty member at each institution of higher education in Missouri. This year’s recipients were honored at a reception in Jefferson City in April. Gao’s nomination was considered by a Missouri S&T committee of Curators’ Distinguished Teaching Professors.