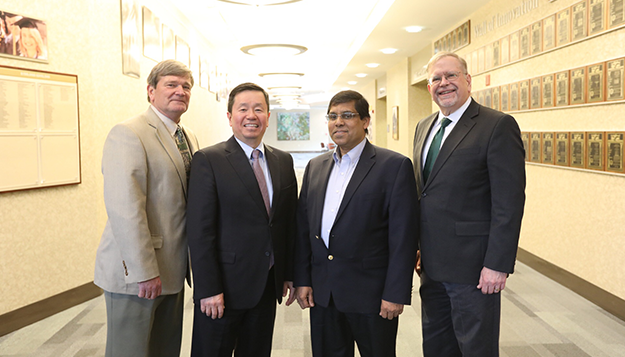 University of Missouri System President Mun Choi presented Dr. Sajal Das with the President’s Award for Sustained Career Excellence on April 11. Das is a professor and Daniel St. Clair Endowed Chair of computer science. He is one recipient of 10 awards bestowed by the president in 2018.

The award, which includes a $5,000 prize, recognizes faculty who show a demonstrated and sustained record of distinguished scholarship, research or creative work for a period of 15 or more years. Das has sustained high quality interdisciplinary research in computer science for nearly 30 years.

Das has presented keynote talks this spring at Reva University in Bangalore, India; the IEEE International Symposium on Mechatronics and Applications at American University of Sharjah in the United Arab Emirates; and the Workshop on Molecular Communications in Ghent, Belgium.