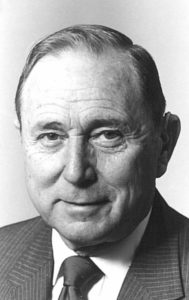 After 25 years in industry, Sineath joined Missouri S&T in 1976 as a visiting professor of engineering management. During his tenure at S&T, he established the university’s packaging program, served as its director and endowed a fund to provide continued support for the program. In 1981, Sineath became the second chair of engineering management, following founding department chair Dr. Bernard Sarchet. He retired as professor emeritus in 1986.