Video game based on McManus book

Posted by Velvet Hasner
On September 2, 2017 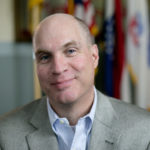 American Courage, American Carnage, a book written by Dr. John McManus, is the basis for Burden of Command, a tactical wartime video game set for release in 2018. McManus is a Curators’ Distinguished Professor of history and political science.

Burden of Command follows the real-life missions of the U.S. Army’s 7th Infantry Regiment, also known as the “Cottonbalers,” during World War II.

McManus also serves as a historical consultant to the game, and has been play-testing it for over a year. He says he looks at the game as an extension of his own work. Read more.

On September 2, 2017. Posted in Accomplishments